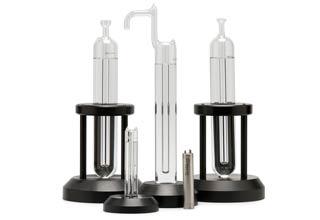 The triple point of water (TPW) is not only the most accurate and fundamental temperature standard available, it’s also one of the least expensive and simplest to use.

Third, for users who characterize probes using ratios (that is, they use the ratios of the resistances at various ITS-90 fixed points to the resistance of the thermometer at the triple point of water, indicated by “W"), interim checks at the triple point of water allow for quick and easy updates to the characterizations of critical thermometer standards, which can be used to extend calibration intervals.

Good triple point of water cells contain only pure water and pure water vapor. (There is almost no residual air left in them.) When a portion of the water is frozen correctly and water coexists within the cell in its three phases, the “triple point of water" is realized. Fluke Calibration water cells achieve this temperature with expanded uncertainties of less than 0.0001°C and reproducibilities within 0.00002°C.