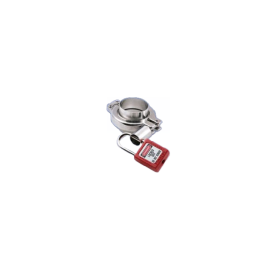 The Shrouded Safety Clamp is based around the design principal of the standard SH Safety Clamp. This new variation benefits from the added safety feature of a domed nut replacing the wing-nut. Using the domed nut guarantees the clamp cannot be loosened by hand, this coupled with the added security of the free rotating nut shroud determines that the clamp can only be released using the correct socket adapter, alleviating problems where the piping line can easily be tampered with or accidentally released.

The Lock-Out Safety clamp for stainless sanitary fittings is an advanced version of the shrouded safety clamp, the wingnut has again been replaced with a shrouded domed nut, the shroud however is extended in length and modified to accept a number coded or key operated padlock. Once the clamp has been assembled, the padlock’s shackle can be passed through the holes in the nut shroud stopping the hexagon head of the nut from being accessed and loosened by a spanner or socket set. The Lock-Out safety clamp ensures the process / piping line can only be accessed by a designated maintenance engineer who has the padlock’s key / number combination

An advanced version of the Shrouded Safety Clamp, having a domed nut. The shroud is extended in length and modified to accept a padlock to prevent unauthorized access.