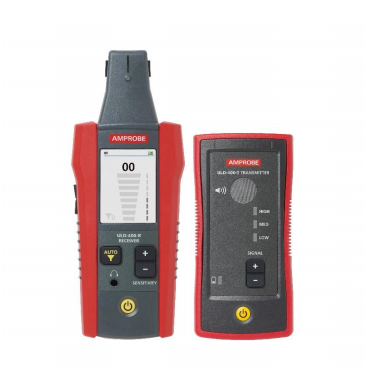 Compressed air is so widely used that it is often regarded as the fourth utility, after electricity, natural gas and water: it is the most expensive energy source across all types of manufacturing and process plants. In fact, air and gas leaks represent a significant source of wasted energy in an industrial environment. Industrial and commercial facilities not performing leak inspections might have bills worth tens of thousands of dollars per year. Compressed air leaks generate ultrasonic sound that is beyond the range of human hearing. The ULD-400 Series Ultrasonic Leak Detectors can detect the ultrasonic frequencies and convert them to an audible range to pinpoint the exact location of a leak as well as detecting vibration or electrical discharge.

The ULD-410 comes with the ULD-400-R Receiver unit, parabola accessory, detachable tubular extension and industrial audio headphones. The Receiver user interface shows the strength of the leak on a large LCD display bar graph and identifies the source of the leak by listening to the converted audible sound emitted via the headphones. For some applications the pressure is not high enough to detect or verify a leak with the Receiver alone. The ULD-400-T Transmitter unit can be used to generate an ultrasonic signal that the receiver will detect. The ULD-420 includes the transmitter as well as items included in the ULD-410.